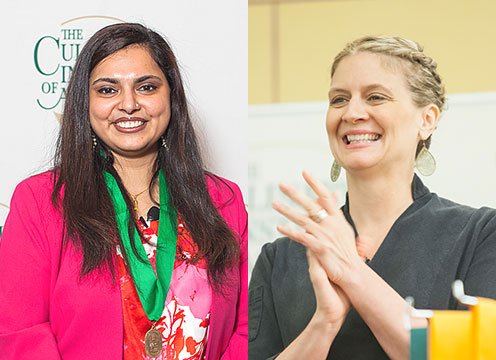 As we celebrate Women’s History Month, it’s only natural that The Culinary Institute of America pay homage to successful women in foodservice both past and present. After all, without innovative and forward-thinking women, the CIA likely wouldn’t even be here today!

Nearly 70 years ago, two intrepid women with ingenuity, grit, and a vision for culinary education—Frances Roth and Katharine Angell—founded the college, starting out with a humble storefront cooking school in New Haven, CT.

The culinary landscape has changed a lot since then. The CIA’s very first class, back in 1946, had a lone woman in attendance. The second class, just four. But today, nearly 50% of our student body is women.

She points out that, according to the U.S. Bureau of Labor Statistics, there are more women managers and owners in the restaurant industry than in virtually any other profession. “Forty-five percent of our managers are women compared with an average of 38 percent in other industries,” she says. “Half of all U.S. restaurants are owned or co-owned by women.”

The opportunities are there, according to Ms. Sweeney. “Restaurant jobs, like no other sector, provide opportunities to women of all backgrounds and experience levels. Our industry helps women gain the experience needed to jumpstart careers or advance toward management or executive positions more quickly than most other industries.”

Women who attended the CIA are taking full advantage of these opportunities, bringing forward their varied educational experiences to great success in the food world.

By her own admission, famed New York caterer Abigail Kirsch “lived” with Gourmet magazine and every other food magazine she could get her hands on. She threw dinner parties and wowed her friends and family with a succession of meals that drew on her own creativity. At one of these soirées she created a crown roast of lamb filled with wild rice and pineapple. It was an unexpected delight for her guests. And it was the starting bell for her culinary future.

But back then, in the 1960s, there were few cooking schools for the food enthusiast, and after exploring her options, Kirsch made her way to the CIA’s New Haven campus for the summer. She arrived to her first class wearing the required dietitian’s white uniform and a hair net. She was the only woman. When she raised her hand to ask a question about the Chicken Pojarski the chef-instructor was preparing, he diligently ignored her until finally, after what seemed like an hour, he said, “Yes, lady, what can I do for you?”

Sensing that she would not get much from this particular class because she was a woman, Kirsch headed outside to the school’s bakeshop, which was then housed in a garage, and had two eye-opening and thrilling weeks learning from the chef there.

The rest is history. Kirsch would go on to serve on the CIA’s Board of Trustees, and today Abigail Kirsch Catering Relationships is one of the food industry’s foremost catering companies.

Things certainly changed at the CIA by the ’80s, and Amanda Freitag ’89 took full advantage, parlaying her education into a highly accomplished career as a chef and restaurateur. She also is a Food Network Chopped judge, and a past runner-up on The Next Iron Chef.

Chef Freitag remembers her CIA experience as happy and eye-opening. She recalls getting up at 4 a.m. for egg cookery class, struggling with bread baking, and sharing the joy of eating sweetbreads for the first time. She remembers learning about the importance of “working clean” from a truly hard-core teacher. And she can recall the day she fell in love with authentic Italian cuisine rather than the Americanized version of that fare.

Despite hearing lots of stories from women about struggling in kitchens dominated by men, Chef Freitag is always surprised when people react to her gender first. “I never think of myself as a female in the kitchen, I think of myself as a chef who needs to get a particular job done,” she says. Even as the only women in her group at the CIA—there were three in total in her class—she felt comfortable. “I was one of the guys,” she explains. “But then, I have two older brothers so I knew how to relate to a kitchen full of men.” However, when she was in a management role, she found that some of the cooks were reacting strangely to her. “It took a while for me to realize that their behavior was because I was a woman in authority,” she says. “I’m sort of gender blind. I guess I just gained their respect by proving to them that I could do my job and their job well.”

Things had advanced at the college even further when, on a cold January day in 1999, Maneet Chauhan ’00 strode onto the CIA campus and saw Roth Hall looming ahead. Her first thought was, “I belong in this place.” Despite experiencing some culture shock—after all it was her first time outside of India and her first snowy winter—she felt herself with kindred spirits. “I was under the same roof with 2,000 other people who shared my passion,” she recalls.

So she immersed herself in the culture and pace of CIA life. She was named editor of the campus newspaper, served on the student judiciary board, was a tour guide, and became a resident assistant. If there were events on the weekends, she volunteered to work them. Her days were spent learning classical techniques and she reveled in the opportunity.

It all paid off for Chef Chauhan as she has gone on to enjoy a standout career as a culinary consultant and celebrity chef. Along the way, she spent eight years at the famed Vermillion in New York City as executive chef. Her time at Vermillion brought her to the attention of the world. She was asked to compete on Iron Chef America against Masaharu Morimoto, and describes the moment as a dream come true. Soon after, Chef Chauhan was offered the opportunity to compete on The Next Iron Chef, which ultimately led to her recurring role as a judge on Chopped.

With so many women—including CIA graduates—finding success in the industry, and more female students on campus than ever before, the choice became clear when it was time for the college to decide on a theme for its 2015 Leadership Awards event. “Celebrating Women Chefs and Restaurateurs”—held April 30 at the American Museum of Natural History in New York City—will honor the following industry trailblazers and role models:

The life’s work of each of these women embodies many things—perseverence, drive, vision, innovation, skill, partnership, communication, philanthrophy, and passion. It’s the same qualities that personify the countless women who are finding career success and life fulfillment in the culinary profession today, setting examples of excellence for future generations to follow.

When it comes to women in foodservice, clearly there is much to celebrate!

« CIA Students Cook Their Way to the Super Bowl » CIA Alumni at the Beard Awards: A History of Success