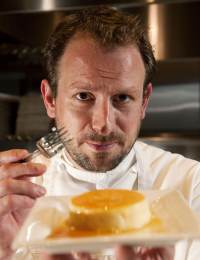 Growing up, Brook Harlan, a culinary arts instructor for Columbia Area Career Center, was influenced by both of his parents equally when it came to his education and eventual career. His mother Linda was a teacher at Rock Bridge High School in Columbia, MO, and his father Tim was a well-respected attorney, member of the Missouri House of Representatives, and lover of food and the culinary arts. “I grew up cooking with him and planning holiday menus,” recalls Brook.

Certain his future was heading towards the kitchen, Brook took part in a weeklong summer exploration class at the CIA in between his junior and senior years of high school. “It was my first taste of formal culinary education, and that set my intention to obtain my associate and bachelor’s degrees,” explains Brook. “At the CIA, you learn so many reasons why you do certain tasks in the kitchen, what’s most efficient, how to work clean, and how to multitask. The bachelor’s program rounded me out as a person, and the proximity to New York City and the ability to do stages was integral to my education.”

On his mother’s advice, Brook looked into a teaching career after graduation. He signed on as a chef-instructor at CACC, and today he’s one of five full-time chefs teaching nearly 200 students across four campuses (another is fellow CIA graduate Katie Fink ’08). The program is accredited by the American Culinary Federation Education Foundation Accrediting Commission and CACC students regularly participate—and earn gold—in SkillsUSA competitions. Since the Columbia Public School district funds just 50 percent of the program, Brook and his students produce numerous community events throughout the year for the school, and extra stocks, soups, stuffing, pies, jams, gumbo, stews, and chili they make are frozen and sold to area restaurants and consumers, with all proceeds going towards the program.

In addition to his teaching career, Brook competed as a contestant in Season 1 of the Food Network Star. In 2006, he signed on as a contributing food editor for Inside Columbia magazine, and in 2008, wrote a cookbook printed through the magazine called Cooking with Brook: Appetizers & Hors d’oeuvres. In 2012, he published Cooking with Brook: Soups and Salads.

A Lifetime of Learning

Brook is quick to trace these and other successes to the foundation of knowledge and invaluable connections he got from his alma mater. “My time spent at the CIA was the best all-around experience; it set me up for a lifetime of learning,” he says. “The instructors are fantastic and you have the option to learn as much as you want, especially with the many opportunities available beyond the classroom. I made so many connections and developed great friendships that help me stay connected to the industry.” And those connections can only help but serve his students as well, as they begin their culinary journeys.

Chef Brook Harlan majored in Culinary Arts Management while attending The Culinary Institute of America in Hyde Park, NY. He is the culinary arts instructor at the Columbia Area Career Center (CACC) based in Columbia, MO.