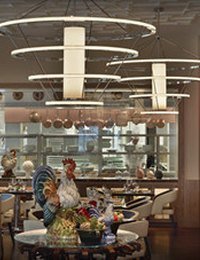 The Bocuse Restaurant hit the ground running when it first opened, hosting banquets for VIPs and running at almost full capacity every night; but despite the challenges it has run nearly flawlessly and continues to inspire awe amongst those that eat and work there.

On its opening day, the restaurant hosted such esteemed guests as Charlie Palmer, Daniel Boulud, David Burke, and others , in addition to the guest of honor, the restaurant’s namesake, Paul Bocuse. Since then it has hosted many of the school’s guest speakers and visiting industry leaders such as Chef/restauranteur Thomas Keller, founder of Chobani yogurt Hamdi Ulukaya, and representatives from the Brooklyn Brewery. With regard to the operation of the restaurant, Chef Sergio Remolina said, “It has been good, we started with this idea and have been happy with the way it has been running.”

According to Jennifer Purcell, Associate Dean of Restaurant Education and Operations, the Bocuse is busier than the Escoffier restaurant before it, boasting over 90 covers a night. Chef Remolina confirmed this and added that for a reservation, it is usually a two to three week wait, and more than a month for a Friday or Saturday night reservation.

The menu at the Bocuse has changed its offerings with the summer season, but has also received some refinement in its layout when compared to some experimental versions attempted prior to opening. The original menu concept was to have a segmented menu where guests could choose from three different backgrounds of food: Classics Revisited, Of Bistros & Brasseries, and Iconic Dishes from Iconic Chefs.

This layout proved to be slightly confusing. According to Senior Director of Special Projects, Waldy Malouf ’75, “The menu was a little bit hard to read, [and it] didn’t present itself as a menu that spoke to the room.” The menu found in the Bocuse today has been refined into a more traditional layout and is much cleaner and easier to read.

As previously mentioned, the menu has changed with the season, and while some dishes, such as the truffle soup, remain, Chef Remolina has added some dishes to reflect the summer offerings. Some of this summer’s most popular menu items are the Chicken Sous Vide, Scallops, Seared Foie Gras with Passion Fruit, and the house made Pate with Cherry Sauce. Dean Purcell also mentioned some new items such as the Pineapple Upside-Down Cake and a White Coffee Ice-Cream with Smoked Chocolate Sauce and Cocoa Nibs.

Some of the biggest challenges met by the opening of the restaurant have been the implementation of the new cooking methods. Since the renovation of the Escoffier into what is now the Bocuse, the most marked change in the kitchen has been the equipment. Dishes can now be prepared with the technique of sous vide by way of a thermo circulator and also the use of hydrocolloids. According to Chef Remolina, who worked in the Escoffier as well as now in the Bocuse, many of the classical dishes have been adapted to the restaurant’s new equipment and, “It [is] a challenge for the student, because with a lot of techniques and preparations we have [at the Bocuse], it [is] the first time for them, so sometimes it’s a little bit hard for them to get used to.” Mr. Malouf also explained that the restaurant was not able to use the termo circulator right away due to delays in the certification process.

Another new method of preparation being implemented is the use of liquid nitrogen. The super-cold liquid is used in what has become one of the restaurant’s signature items, Tableside Ice Cream. Another way that liquid nitrogen has been utilized was described by John Fischer ‘88, Professor in Hospitality and Service Management, as creating vanilla snow for a house-made orange soda-cream sickle wand also something he called, “a cocktail in the rocks” where a beverage is turned into a frozen egg-like structure that is shattered tableside by the serving staff with the help of a jeweler’s hammer. Another exciting aspect of the Bocuse’s menu that will come to fruition soon is access to a beverage-focused herb garden. Plans to put an herb garden in Heinz Plaza were confirmed by Dean Purcell and will go underway after the completion of the Marriott Pavilion. Herbs will be available for hot beverage infusions and possibly beer.

One of the biggest changes in protocol is the way the back of house is run compared to the previous Escoffier restaurant in that desserts are now being prepared by an in-house team of Baking & Pastry students led by Chef Stéphane Weber. This advantage was described by the Escoffier’s previous Chef Xavier Le Roux, “When it comes to pastry…at Escoffier, everything was done by us and some of the desserts came from Apple Pie [Bakery]; now they have a class and a pastry chef to prepare all of the desserts, which allows for a big load to be taken off the kitchen…they come out also much better than what [the Escoffier] was able to do.” Mr. Fischer expanded on this by saying that, “The desserts are a game changer, and Chef Weber is the first pastry chef to work in one of the school’s restaurants. For forty years, we never had a pastry chef in the restaurants, these are real New York City quality desserts.”

Overall the reception of the restaurant has been very good. As Mr. Fischer put it, “Service is impressive…we continue to get raves from the guests…they are given a level of detail they may not have seen at any restaurant besides the very top.” He put the project into perspective when he said, “It’s an honor to be on the opening team for a restaurant like this, it really is one of the times when we as faculty truly get challenged. Opening a restaurant anywhere is hard, but opening a new restaurant when you have a new group of students every three weeks…it really reminds you why you’re in this business. It’s fun to rise to the challenge.”