Home » Student Bloggers » Baking Through the CIA: And They’re Off!

Baking Through the CIA: And They’re Off! 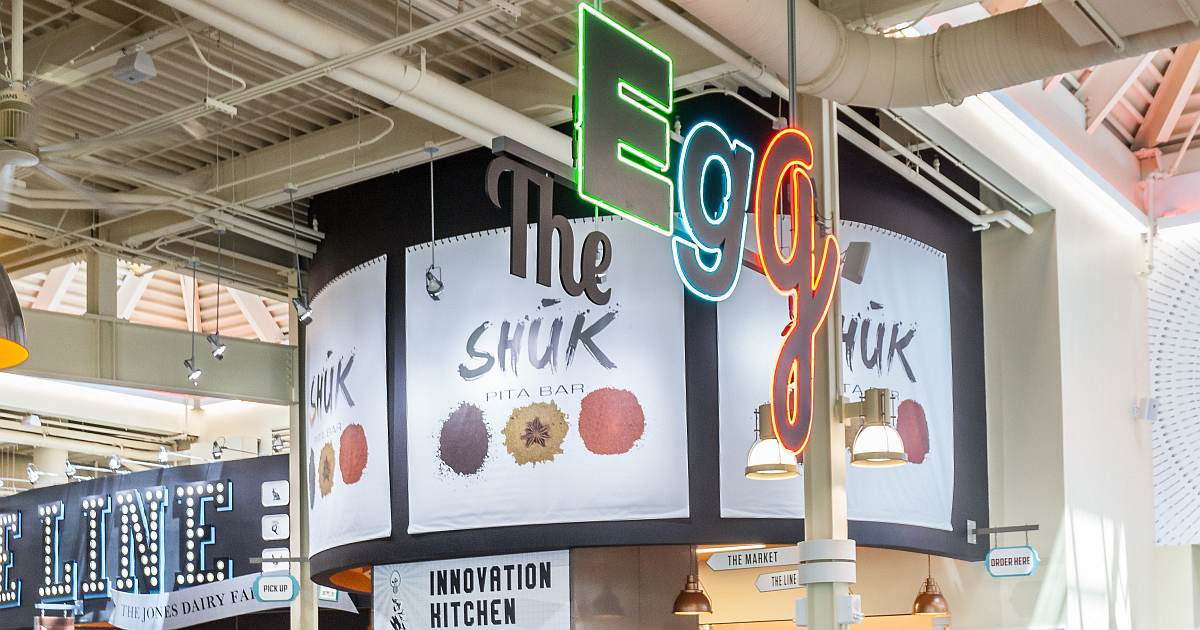 “Food. It’s who we are. Its what we do.” These are the words that echoed through the Danny Kaye Theatre, as CIA President, Timothy Ryan, began his freshmen orientation address. No other statement could better encapsulate the audience. To them, to me, to everyone on campus, food is more than just a meal. It is our passion and drives. We strive to create, impress, and satisfy. It is our lives.

This past Monday marked my first steps on campus as an official student. As my family and I pulled off the highway and through the now familiar entrance to the Culinary Institute of America, I was overwhelmed by a sense of excitement and wonder. After months of preparation and exchanging of messages of anticipation with other students through the school’s online channels, I was finally here. We slowly coasted past the admissions building where my first campus tour had left from a year earlier. We moved onward towards Anton Plaza, and finally to our destination, Pick-Herndon Hall. As we approached, we were met by a gaggle of neon-clad student from the CIA’s welcome team; a cheery group of volunteers who directed me to what was to become my home for the next six months. After absorbing my new surroundings, I made my way back downstairs, where like an army of ants, the welcome team swarmed my cars and stripped them of all my possessions. It took less than five minutes for them to fully move me into my room. As they departed to assist the other new residents, my family and I unpacked my things and helped me get settled in. When the time came, I left my family to their own and headed off with my new classmates on a tour of the campus’ facilities. This time, we were to be shown what the public doesn’t have access to.

For the first time, I walked through the underbelly of the main facility, Roth Hall, which contained a large amount of the culinary production kitchens. Each kitchen has a specific designation and purpose. Some are based on the type of meat that’s handled within, while others are world cuisine specific. Aside from being teaching kitchens, each one operates as a mini restaurant, providing the student body with multiple options to choose from for lunch and dinner. We moved through the rest of the building, getting a look at every location that will be of use to us in our time on campus. At the conclusion of the tour, we rejoined our parents for a short presentation on rules and regulations, before heading off with them for a final meal before their return journeys home. To conclude the day, we attended two more presentations that stressed the rules and regulations as well as the school’s strong ethical and moral values we are expected to uphold. With an early breakfast scheduled for the morning, I returned to my room and retired for the night.

Sleeping away from home can initially pose to be difficult, and this was no exception. After a rough night of sleep, I woke up at 5:30 am to prepare for breakfast. Despite the lack of sleep, I felt surprisingly energetic, as my body flowed with pure excitement and adrenaline. After tidying up my dress code compliant, business casual outfit, I proceeded to make my way to The Egg, the CIA’s newest multi-use structure that houses a student operated dining hall, as well as a fitness center, gymnasium, and pool. The main eatery in the dining section, known as “The Line,” was where our breakfast was to be prepared.

We were presented with a multitude of options, such as Korean bibimbap, a striking eggs purgatory, a tortilla topped Aztec casserole, and classics such as fried eggs and hash. I chose to order the French omelet, a delicious and spongy egg pocket, scrambled and cooked just beyond the point of coagulation. It was filled with a beautifully spiced chicken-apple sausage and complimented by a creamy goat cheese that melted into the slightly runny inner surface of the egg. As I have quickly learned to expect from this school, it was perfection. The students working in The Egg are taking their “high production” course and will be leaving for their externships in a few weeks. It’s wild to think that they have only been in school for five months. With its military background, the school really does a great job of using rigorous structure to hasten the maturity and skill sets of these young chefs. For them to be as proficient as they are, is really a merit to the school’s reputation.

From breakfast, we proceeded to the admissions center, where student accounts were scoured for issues that could potentially inhibit their progress at the school. Once cleared, we were ushered back to The Egg, where we were given temporary jackets and took pictures for our school ID’s. Upon completion of the process, we were each treated to a T-shirt, as well as a voucher for a free dinner at one of the on campus restaurants.

Around mid day, we gathered in the Danny Kaye Theatre, where we were given a rousing speech by President Timothy Ryan, encouraging us to be the best version of ourselves that we can be. This advice humorously mimics that of the U.S. Army’s mantra, “Be all you can be,” another call back to the school’s history with the military. During his speech, he took the time to teach us the school’s Alma Mater and asked for volunteers to perform it in front of the room. I, not wanting to miss a chance to display my enthusiasm, nearly jumped out of my seat at the opportunity. One of my friends and I made our way to the front of the theatre and were joined a short time later by two more volunteers. Very few people seemed to want the opportunity. We all performed the tune in a way that can only be described as shoddy. President Ryan then revealed the lesson hidden in this exercise. Having only heard the song once, it was not expected that our rendition was to be good. What mattered was that we put ourselves out there and tried. It is expected that we may not be perfect, but putting in the effort is important, and that’s how we should approach our schooling. As a thank you gift for being his willing participant, he presented each one of us with a copy of the CIA textbook, Vegetables.

We left the theatre for the gymnasium, where we split off into groups and participated in team building exercises from the Project Adventure playbook. It was all very similar to activities one may play at a summer camp. At the conclusion of the event, our uniforms and knife kits were distributed. It was exhilarating to see myself in chef whites for the first time. It was like looking at an image from the future. They signified possibilities and potential of where my life may lead. After this was dinner, where I once again sampled The Line’s offerings. I ate a pork loin so tender, the knife near fell through it with minimal contact. It was like a pad of butter on a warm day. It floated in a pool of brown mustard sauce and was accompanied by a trio of steamed broccoli, peas, and carrots. As always, it was perfection.

The next day was a bit arduous, as it required us to sit through 9 hours of presentations at the Danny Kaye Theatre. They covered topics such as safety, I.T. info., student employment, and meal plans. Though important information, It was difficult to sit that long. Luckily, we got a lunch break that enabled me to sample the exotic cuisine of the Far East at Roth Hall’s Asian Cuisine production kitchen. It is a very interesting system they have in place. The kitchen spends the morning preparing a menu. Each main dish is accompanied by two appetizers. When lunch comes around, students form a line in front of the kitchen, and a small table is set up to display the day’s meal options. I decided to go with the take out classic, Orange Chicken. The flavor was very similar to what you may find at your local take out restaurant, but the quality was far superior. It was covered in a crisp to the bite fried coating and lacked that heavy oil typical of Chinese food. It was served with stir fried vegetables and a dome of rice. The dish came with a small cup of soup, and an elegantly twirled plate of cold sesame noodles. It was very satisfying and very different from any meal I had previously eaten at the school. The meetings continued beyond lunch, and culminated with the “ceremony of the toque.” Deans of each department weaved through the rows of the theatre, placing a toque on each student’s head as if knighting them. This was our initiation to the next stage. 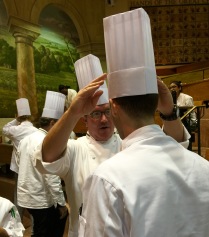 The two following days saw me in the kitchen for the first time. It was also the first time all of this cohort’s baking & pastry students had been gathered in one place. It was interesting to hear their diverse backgrounds and future aspirations.

The first class I will be taking is called Baking and Pastry Techniques. It will cover the different mixing methods, and see me bake things such as cookies, pies, and cakes. We spent the class discussing what sort of things will be expected of us, and what we are to learn. Our chef instructor, Chef Berlioz, treated us to a small meal of cheese, bread, cookies, and beverages. It was a nice welcome and tease of what’s to come.

During the second day, we were split up into groups of two for the semester and given assigned seating. We were instructed on proper procedures for conducting ourselves as well as the setting up and tearing down of our workstations. We also took a tour of the facilities pertaining to our class. This included a trip to the storeroom, as well as the innovative 3D sugar printing lab the school is experimenting with. The shelves within are adorned with small sculptures the workers have designed with the printer. Though not food grade yet, the school is researching its potential for the culinary industry. Our class concluded with a run down of the contents of our knife kits. After class, our professor accompanied us to Farquharson Hall, where we were fed by the banquet class practicing their front of house service before their imminent migration to the campus’ public restaurants. We were fed a delicious four-course meal that consisted of a lentil soup, kale salad with Parmesan crisps and croutons, roast turkey, and a slice of vanilla butter cream cake.

This was an incredible week. It feels as if there is this sense of momentum that is slowly building like a snowball falling down a hill. I already get the feeling that my time here will go by faster than I expect it to. I have met some truly incredible people, and am looking forward to some truly incredible experiences. Starting next week, I will be in the bakeshops, getting my hands dirty, and working my way towards the future. I can’t wait to see what’s coming my way.