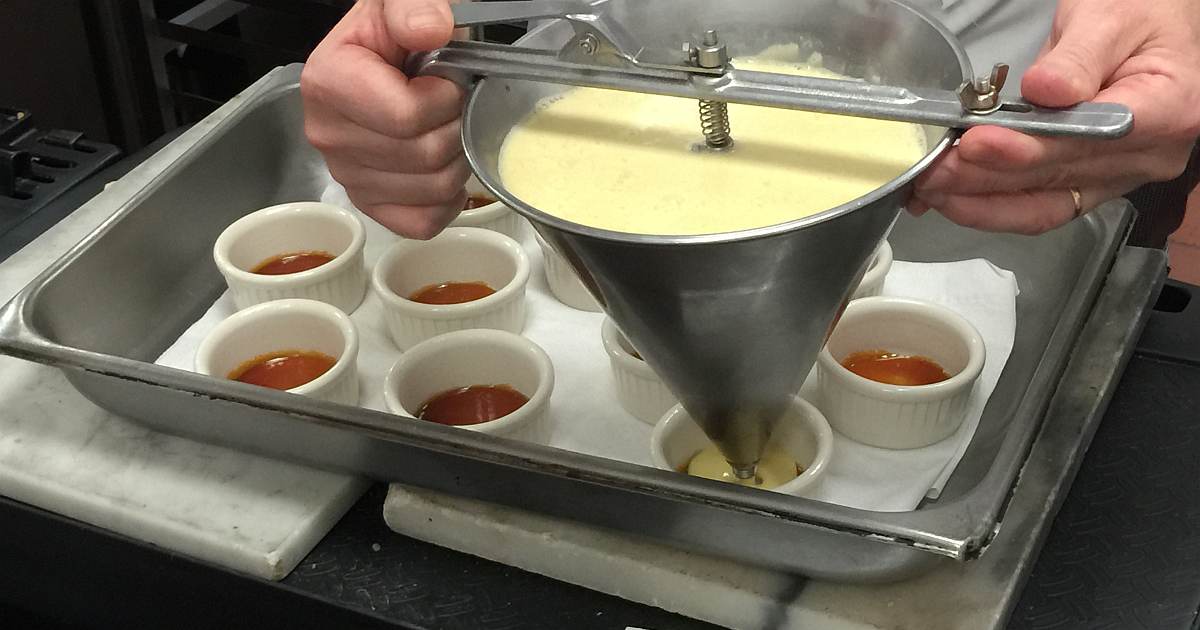 The CIA accepts students on rolling admissions, meaning a new group starts up every three weeks. As this is my fourth week, this means I am no longer the fresh meat on campus. It’s funny seeing all the new faces around, looking slightly lost, not knowing what to expect, and thinking about how that can all change in three weeks time. My time here is moving at lightning speed, and the arrival of new students only serves to accentuate that fact. I have learned so much thus far, and cannot wait to learn what else the school has to offer. 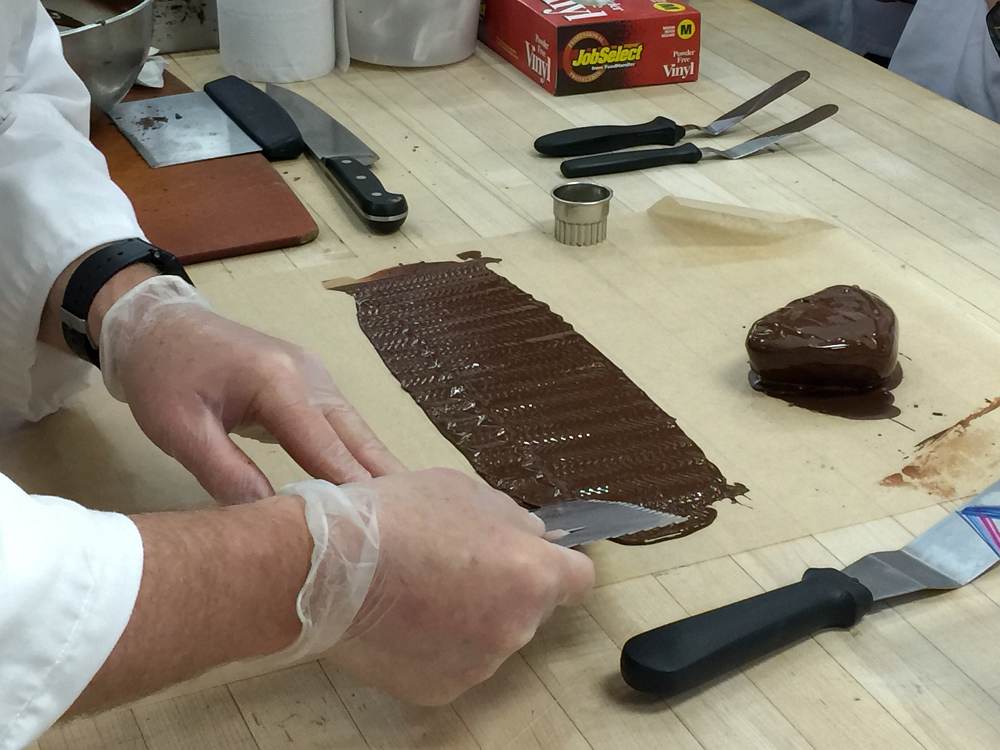 The week started with another lecture class, this time focusing on my favorite culinary topic…chocolate. Chocolate is so versatile and satisfying. It really can be used in any meal. Our demo for the day covered the “block” tempering method, as well as some basic design and cutouts for use as garnish. Tempering is the crystallization of cocoa butter. There are multiple methods to facilitate this process, but the easiest consists of using a tempered piece of chocolate as a seed to spur on the crystallization of melted, un-tempered chocolate. The chef demoed this method, first melting down chopped chocolate, removing it from the heat, then drop in a block of tempered chocolate (1/4th the weigh of the melted chocolate), and stirring till the bowl was no longer hot. He tested the temper on multiple metal spatulas, telling us what we should be looking for in properly tempered chocolate. It should have a nice shine and a proper snap. The qualities became more apparent with each subsequent test. When cooled, he poured the chocolate out in a thin layer on parchment, before cutting circular garnishes out with a cookie cutter. It was fascinating, and a great introduction to a topic that is sure to be integral to our baking & pastry skill sets.

Our first kitchen class of the week focused on the production of classic custard desserts such as crème caramel, chocolate pot de crème, crème brulee, and crème anglaise. Many of these utilize the same processes, with subtle changes that yielded noticeable flavor and textural variations.

We began with the task of producing crème caramel. Crème caramel is a thick, somewhat gelatinous vanilla custard, cooked with a layer of caramel. It differs from other custards, specifically crème brulee, in that it uses whole eggs, yolks, milk, and cream, rather than just cream and yolks. It is also the only one typically unmolded when served.

I followed the standard custard procedure of boiling the liquids with a portion of sugar, while simultaneously whisking the remaining sugar with the eggs. The liquid is then tempered into the eggs to make the base. The bottom of the ramekins, into which the base is to be poured, is coated with a layer of hard caramel produced by the wet caramel method (boiling water and sugar). It was a surprisingly fast process, as the base was prepared within 15 minutes, and ready to go in the oven. I piped it into the ramekins, which were baked in a water bath to provide them with even heat. The baking process took approximately 45 minutes, during which I cleaned up and moved on to the next product.

We were given the opportunity to choose between producing crème brulee, or chocolate pot de crème. I chose the pot de crème, as it was more of a contrast to the crème caramel than crème brulee. It used the same custard making process as the crème caramel but added a few extra steps to the production of the liquid portion of the base. The milk and cream are heated, while simultaneously making a caramel in a second pot using the dry method (just sugar). When the sugar is caramelized, the warm liquid is added to the caramel to stop the cooking and make a solution. Chopped chocolate is then added to this mixture to melt, where it is then blended in until the mixture is smooth. The recipe then proceeds with the same tempering of the liquid into eggs as the crème caramel. I didn’t get a chance to skim the foam off my finished base, leaving me with a white haze over the top of my finished product, but they were a flavorful textural dream. We stored them away for Thursday’s class where we were to decorate and plate them.

In addition to completing our custards on Thursday, we learned foaming methods, which are utilized in the production of Angel Food Cake and Genoise. Genoise is a dry sponge cake and is one of the items that we will be required to make for our comprehensive practical exam before we leave for the externship. This marks the first of many times we will be practicing it. 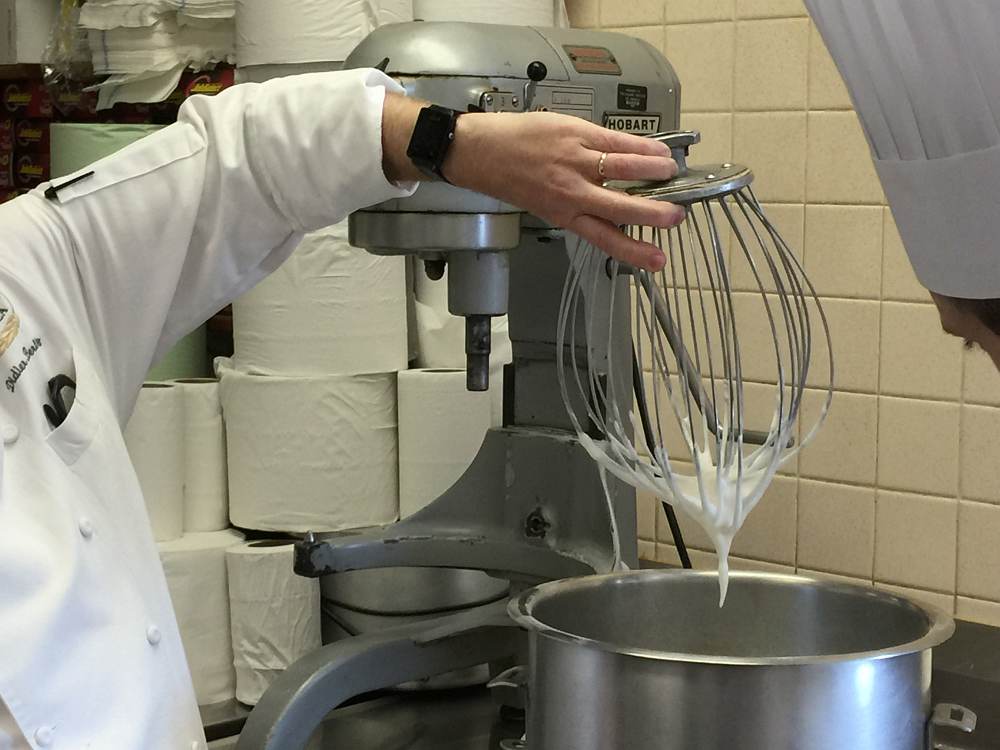 The two rely on air beaten into the eggs for leavening but differ in the part and preparation of the eggs used. In Angel Food Cake, we used what is called the “cold foaming method,” which is when egg whites are beaten with sugar to medium peaks. This French, or common meringue as it is also known, is then stabilized by folding in the flour. This is a very unstable batter, and time is of the essence when it comes to mixing it and getting it in the oven. The more time you take, the more volume you lose, leading to a collapsing product with air pockets.

The Genoise, on the other hand, uses full eggs that are heated with sugar over a bain marie, in order to dissolve the sugar and strengthen the egg proteins. This allows for the eggs to be whipped to maximum volume when transferred to the mixer. The process then continues on the same as Angel Food Cake. As opposed to the Angel Food Cake, which is baked in a special tube pan, the genoise is baked in traditional cake pans. When we finished production, we were given permission to plate and decorate our custards from the previous class.

Plating the crème caramel proved to be a slightly tricky endeavor, as you have to invert the ramekin onto a plate, and shake it out in one piece. You are allowed to run the tip of a paring knife around the edge to loosen it, but you can’t go any deeper without the risk of damaging the product. After, unmolding them, I set aside my 6 best ones as instructed. The pot de crème’s was kept in their cups and placed on plates. Luckily, the white glaze that had developed from not skimming my custard dissipated, and my final products were better looking than I had anticipated. We decorated them with fruit and placed them on a speed rack to be sent down to Farquharson Hall for consumption. It was a very cool feeling knowing that someone was actually going to eat what I had made. Until this point, it has all been in practice. After sending out the plated desserts, it was time for the chef’s evaluation of our day’s work. We set our productions out on our station as he made his rounds. 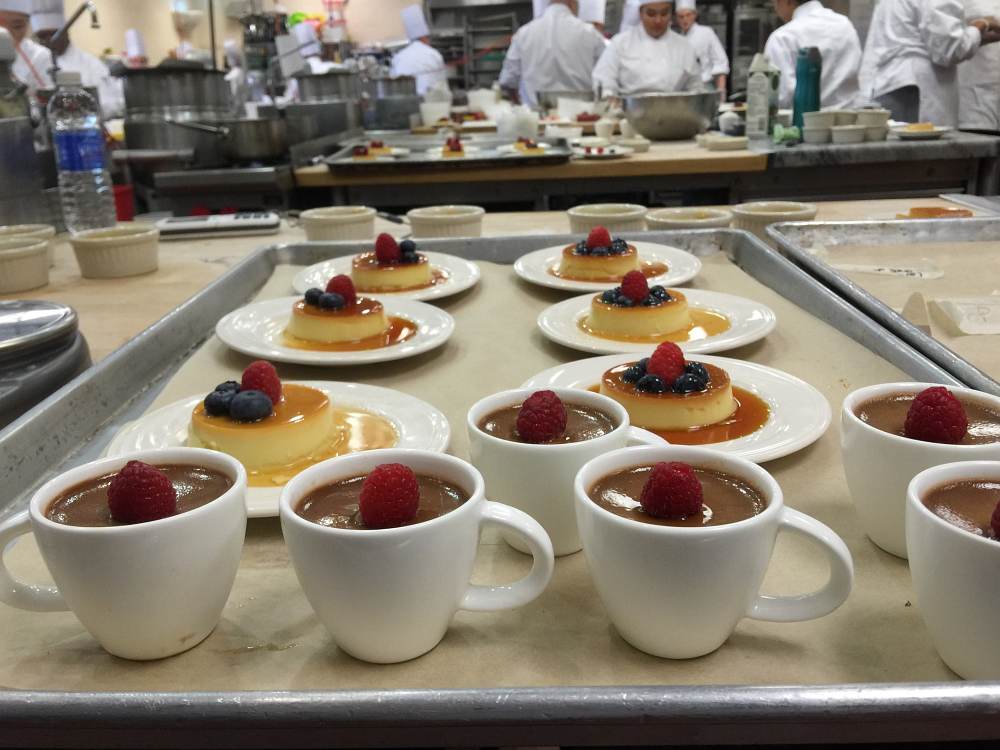 The chef was overall satisfied with my work. My genoise suffered from a few spots on its surface that he explained as being caused by my scraping of unmixed flour into my cake pans. One of the keys to making a good genoise is to only use the homogenous mixture in the final products. If there is some residual, thicker batter around the rim of the bowl as you are pouring out your batter, it is important not to touch it. The cake had a few air bubbles inside, but not enough to ruin the texture of the product. Overall, it was a good first attempt. My group’s Angel Food Cake was also good, only suffering from being somewhat overcooked. The exterior was overly brown, but the interior was white, fluffy, and soft, just as it was supposed to be. The Chef was satisfied with this as well.

As week four at the school comes to a close, things are starting to get a bit more stressful. I’m certainly getting a crash course in time management through the kitchen. There is a lot of information coming our way, but I’m keeping up with it. I plan to practice the skills learned in class on my own time, and better my understanding of our formulas. I’m learning a lot, and having loads of fun at the same time. I can’t wait to see what next week holds.

Latest posts by Andrew Bergman (see all)
« CIA Student Food Podcast: The Feed » 6 Tips to Stage at a Restaurant Successfully