Home » News and More » At Home Atop Medal Stand at the SkillsUSA Competition
July 10, 2018

At Home Atop Medal Stand at the SkillsUSA Competition 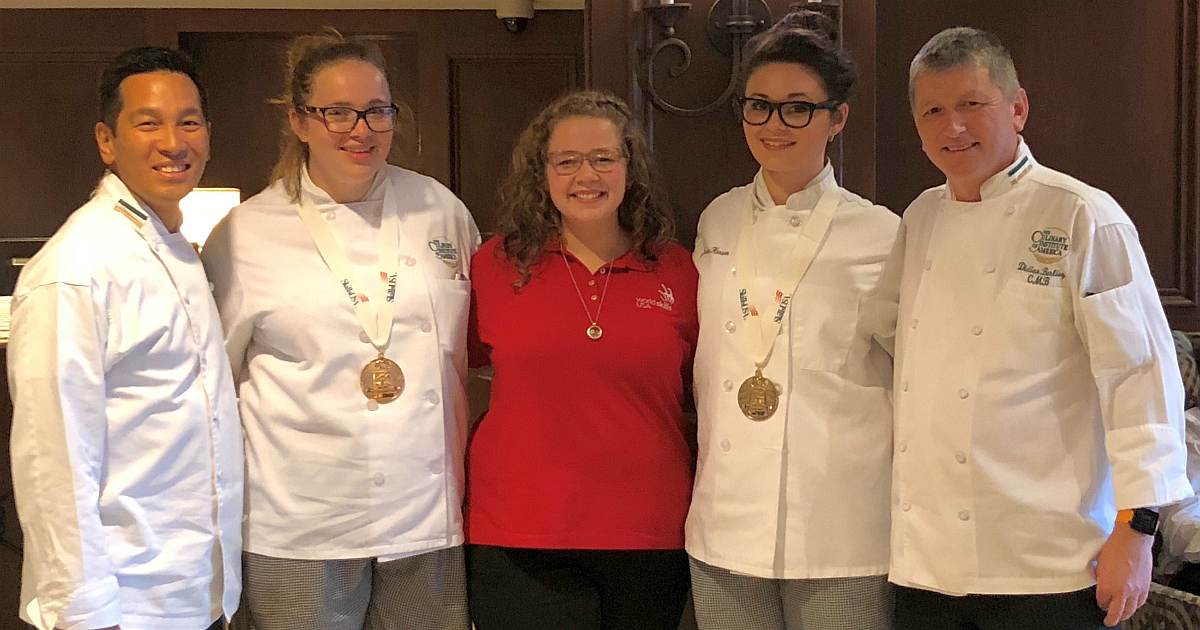 More proof that The Culinary Institute of America provides the best culinary and baking & pastry education in the country: three CIA students went to the national SkillsUSA competition in Louisville, KY in late June. All of them came away winners in their respective categories, and one even earned a spot in a global cooking competition!

Freshman Jessica Henson of Lewiston, ME was the gold medalist in the Commercial Baking category, beating 22 other entrants. Junior Ashley Tolley of Glen Rock, PA took home gold in the Culinary Arts category, with the best score among more than two dozen competitors.

In addition, CIA sophomore Julia Spondike of Lorain, OH, won a special cook-off to represent the United States at next year’s WorldSkills competition. After winning the two-day competition, Spondike will now prepare to head to Kazan, Russia as the American representative competing in Culinary Arts.

“It is definitely the highest honor I’ve had in my cooking career,” said the 19-year-old Spondike, who earned her spot in the cook-off by winning the national high school culinary competition last year. “It’s also a huge commitment. I’ll be training the rest of this year and much of next year. I look forward to it.”

The students trained for SkillsUSA under CIA faculty members Lance Nitahara and Didier Berlioz. Chef Nitahara is a CIA graduate who won several culinary competitions as a student. CIA students have won 10 gold medals at the national competition in the last 12 years and more than a dozen golds at the New York State level.

“Competing in SkillsUSA is a valuable addition to our students’ education,” says CIA professor and SkillsUSA advisor Ezra Eichelberger. “Competition requires concentration, commitment, and focus. With the plethora of distractions in today’s world, students participating in SkillsUSA hone their skills through this focus toward an achievable goal.”

Winning the SkillsUSA competition is also a resume enhancer that gets CIA students noticed as they set out to begin their careers in the food world.

SkillsUSA is the national organization for students in trade, industrial, technical, and health occupations education. It sponsors annual SkillsUSA Championships in 100 fields to recognize the achievements of career and technical education students and to encourage them to strive for excellence and pride in their chosen occupations.

« New CMBs: Learning from the Best in Baking and Pastry » Stars and Stripes Weekend at the CIA