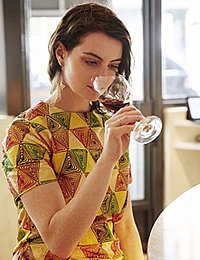 Andrea Morris’s first passion was gymnastics. “I spent all my time at the gym,” says Andrea, beverage director at Nix, a plant-forward restaurant, and Intersect by Lexus, a collaboration of Lexus and the Union Square Hospitality Group in New York City. “When I stopped doing gymnastics, I didn’t know what to do.” A family friend ran a catering company and Andrea found she loved the work. At the age of 16 she got a job at the popular Bay Wolf restaurant in her hometown of Oakland, CA. When it came time to choose a college Andrea only had one choice, The Culinary Institute of America. “Both of my parents are really education driven and wanted me to get my bachelor’s degree,” Andrea recalls. “I was determined to go to culinary school and the CIA gave me the option of accomplishing both objectives. I was also wanted to be close to New York City. The Hyde Park campus is beautiful, and being so close to the train station allowed me to get to the city with ease.”

Originally, Andrea’s goal was to become a chef but the Introduction to Wines class opened up a new world of possibilities. “Supposedly, it is the hardest class in the curriculum, but I’m really competitive and driven so I took it as a challenge,” Andrea says. “I’m a bit of a nerd so all the geography and history was really appealing. The immersion of studying about all the wine-producing regions in the world was really cool. You get to learn your palate really fast, get comfortable at tasting, and learn the language of describing wine so you have the vocabulary to talk about it. I studied really hard and aced the class.”

When Andrea began her bachelor’s studies she helped her fellow students as a wine tutor. “I really enjoyed the experience of taking what can be an overwhelming topic and making it more accessible and relatable,” she says. “Keeping it light and fun and taking the information out of context made it easier for students to understand.”

After graduation, Andrea got a job as a server at Eleven Madison Park then moved on to sommelier positions at Oceana and Jean-Georges, where she stayed for three years. All the while, she continued to study wines and in August 2013 Andrea passed the Advanced Sommelier exam from the Court of Master Sommeliers. “I’m working towards the Master Sommelier exam,” she says. Andrea and her friend Morgan have launched Sommposium. “We host two lectures once a month for free. It’s approachable and accessible to anyone. I do love wine education and the whole idea behind Sommposium is that we want to foster the next generation,” Andrea says.

Andrea was recognized by StarChefs.com as the 2017 New York City Rising Star Sommelier, the Zagat Survey as one of the 2016 30 Under 30 Rock Stars Redefining the Industry, and the 2019 40 Under 40 Tastemakers by Wine Enthusiast magazine.

“At the CIA there are so many cool clubs and experiences you can take advantage of. If something interests you, all you have to do is put a little effort into it. If you find something you’re passionate about you can make it happen. The resources are all there,” Andrea says.

Andrea Morris majored in culinary arts management at The Culinary Institute of America in Hyde Park, NY. She is the beverage director at Nix Restaurant and Intersect by Lexus in New York City.