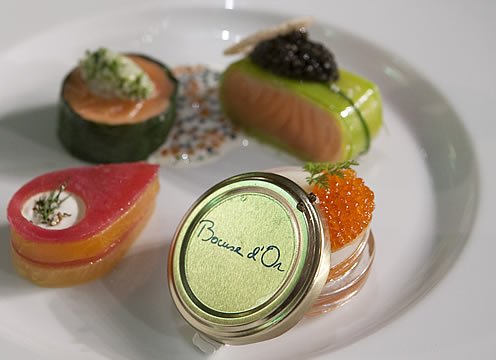 After CIA graduate Philip Tessier ’99 led the United States to a second-place finish—its best-ever showing—at this year’s Bocuse d’Or, the foundation behind Team USA is well into its search for the chef to keep the Americans on the winners’ platform in 2017, and two of the finalists are fellow alumni.

Gerald Ford ’03, executive sous chef at the Westchester Country Club in Rye, NY, and Angus McIntosh ’11, sous chef at The Broadmoor in Colorado Springs, CO, are among the four candidates selected by ment’or to compete to represent Team USA. The candidates will face each other in a rigorous day-long event in December that mimics the actual Bocuse d’Or competition. The winner will lead the U.S. team in the next edition of the world’s most prestigious cooking competition, which is held once every two years in Lyon, France.

As chef of the two-person team that won the silver medal (Bocuse d’Argent) at the 2015 Bocuse d’Or, Tessier will serve as coach for the next Team USA.

« CIA Alumni in the News, September 2015 » The Other Culinary Arts: Writing About Food