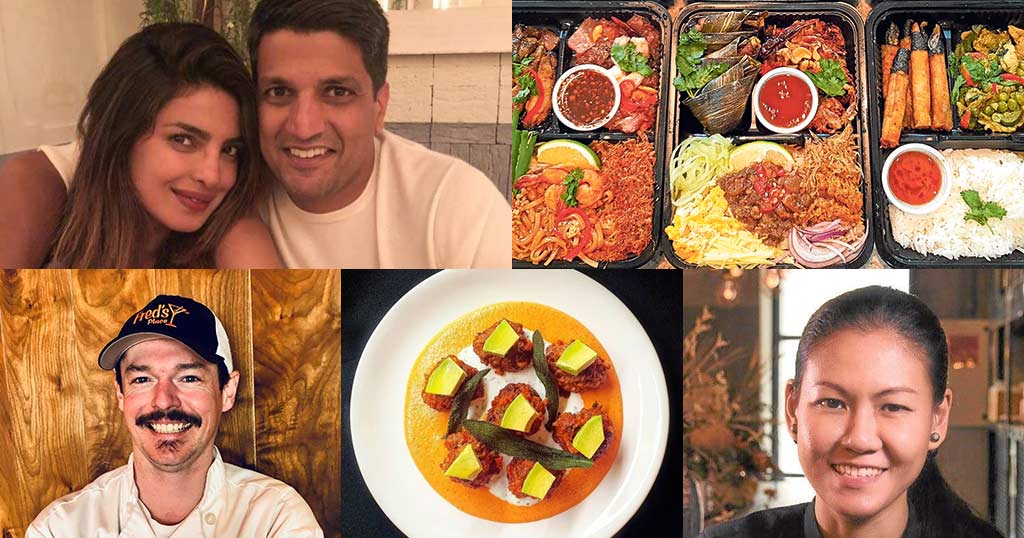 CIA alumni are always cooking up something interesting, and with a network more than 50,000 strong, there’s never a shortage of highlights! Here are just a few examples of CIA alumni in the news this past month.

CIA Instructors in the Spotlight

A Taste of India (and Celebrity) Comes to Flatiron
Hari Nayak ’97 will be the head chef at celebrity Priyanka Chopra Jonas’ recently opened Indian restaurant, Sona, located in New York City. The article mentions that Nayak started his journey at the CIA and is now one of the most sought-after Indian chefs in the industry.
Read the article in the News India Times >

A Peachtree in a Sea of Orange
Syracuse.com featured Peachtree Sandwich Company in DeWitt, NY, owned by David Anastasio ’00, as part of their “First Look” section, in which they visit new local restaurants and share their experiences.
Read the article on Syracuse.com >

Back in the Game
Christine Nunn ’03 will be taking over the kitchen as executive chef at Esty Street in Park Ridge, NJ. The high-end American restaurant has been a staple in the community since 1992, and the owner is excited to have a new culinary presence in the kitchen.
Read the article on North Jersey.com >

Brilliant Pairings
Jae Jung ’10, who got her start in the industry working in fine dining, is introducing a new Korean-Cajun delivery and takeout restaurant concept—Kjun—in New York City. The menu blends Korean and Cajun flavors and dishes, inspired by her time working with chef Leah Chase in New Orleans, LA.
Read the Eater article >

A CIA Two-fer
Fresco Café in Bozeman, MT, announced the promotion of Arthur Sager ’18 to head chef. Sager will now oversee the kitchen, staff, and menu innovation. Josh Holman ’19 has been promoted to sous chef and will now focus on maintaining the quality and efficiency of the kitchen.
Read the Bozeman Daily Chronicle article >

The Secret’s Out
Jonathan Klip ’16 opened his secret small-scale bento box restaurant based in Toronto, selling just 10 boxes a day, as a pandemic project after returning from Kyoto, Japan. The restaurant accepts orders through Instagram direct message only, and the bento menus change every two weeks to reflect seasonality.
Read the BlogTO article >

A Family Affair
Damien Brockway ’03 traded in his fine-dining tweezers for a food trailer with his recently opened Distant Relatives in East Austin, TX. The menu features modern African American cuisine, which Brockway hopes will help to create more of a discourse on African foodways in the area.
Read the Austin American-Statesman article >

An Honor to be Nominated
Johanne Siy ’12, head chef of Lolla in Singapore, is a “Female Chef of the Year” nominee for this year’s World Gourmet Awards in Singapore. She is recognized for her eclectic cuisine that combines her Filipino background with her culinary education. Winners will be announced in April.
Read the article >

That’s Using Your Noodle!
One Prawn Noodles, founded by Gwyneth Ang ’15, was featured on SBO Magazine’s list of “The 10 Best Prawn Noodles in Singapore.”
Read the SBO article >

Raising the Bar—the Dessert Bar, that is
Freny Fernandes ’18, owner of Moner in Mumbai, India, discusses the inspiration behind bringing the popular dessert bar concept to India with her decadent and different desserts.
Read the article >

The Sommelier of… Energy Beverages?
Timothy Riley ’05 has gone viral on TikTok, gaining almost 90,000 followers, for reviewing energy drinks using a fine wine tasting format. Riley has his Advanced Sommelier certificate and was inspired to create his TikTok account when his wife, who is very into fitness, was trying out different energy drinks and he got curious about the flavors of each.
Read the article on Baltimore.com >

The Saint Lucia Hospitality and Tourism Association has teamed up with Nina Compton ’01, who is a St. Lucia native and whose father was Prime Minister there, to launch a GoFundMe campaign to help local St. Lucia restaurant workers. People who donate more than $50 are entered into a drawing where they can win dinner for two at Compere Lapin, Compton’s restaurant in New Orleans, LA, among other exciting experiences.
Read the article >