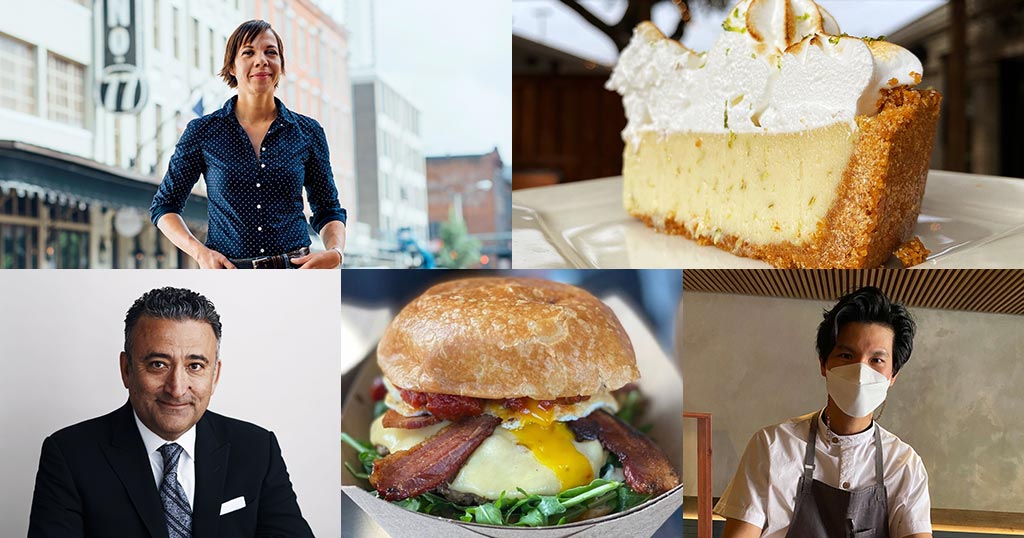 CIA alumni are always cooking up something interesting, and with a network of more than 50,000 strong, there’s never a shortage of highlights! Here are just a few examples of CIA alumni in the news this past month.

A Garden Oasis in the USVI
After his success with Shaibu’s Gourmet Grab & Go, Shaibu Abdulai ’08 is opening Shaibu’s Garden Oasis, a fine dining restaurant, on Cruz Bay in the U.S. Virgin Islands. The restaurant will have a global fusion menu with as many locally source ingredients as possible.
Read the Virgin Islands Daily News article >

Rave On
Thomas Wicinski ’83, head of food and beverage for supermarket chain, The United Family, will spearhead the company’s latest project, Rave On, a new fine dining and performing arts experience located inside Buddy Holly Hall in Lubbock, TX.
Read the article on everythinglubbock.com >

Come for the BBQ, But Don’t Miss the Sides and Desserts
Texas Monthly gave Michael Lane’s ’96 Dallas, TX restaurant, Oak’d Handcrafted BBQ a glowing review. Critic Daniel Vaughn mentions that Oak’d provides an experience beyond the meat with unique sides and sandwiches using premium products, and some of the best desserts he’s ever eaten.
Read the Texas Monthly article >

All in the Family
This spring, Daniel Darves-Bornoz ’78 will be debuting a new concept, Josie’s Table, in Guilderland, NY. Josie’s Table will replace his previous operation, Provence Restaurant and Wine Bar, which he closed last March due to the pandemic. His son, Peter Darves-Bornoz ’11 will be head chef.
Read the Times Union article >

Brewing up Something New
As she prepares to move on to her next venture as the new director of culinary operations at Terrestrial Brewing Co. in Cleveland, OH, Penny Barend Tagliarina ’06 reflected on her favorite moments at Saucisson, an artisan butcher.
Read the Cleveland Magazine article >

Sourdough Crêpes + Zero Waste Kitchen = A Recipe for Success
Royi Shwartz’s ’05 Vienna crêperie is featured in Kurier, an Austrian daily news outlet. Shwartz produces and ferments many of his own ingredients and runs a no-waste kitchen. This article describes his journey to the CIA, highlighting how he went from baking in the Israeli military to saving up enough money to study at the college.
Read the article in the Austrian newspaper, Kurier >
(Select the “translate to English” option in your web browser)

Ice, Ice Baby
Stan Kolonko ’91, a chef turned master ice sculptor, showed his work at the Ice Sculpting Masters Winter Wonderland Drive Thru at the Erie County Fairgrounds in Hamburg, NY, near Buffalo. Kolonko worked as a chef for 25 years before opening his business, Ice Farm, and started competing in the late 90s.
Read the Buffalo News article >

A Veteran in—and out—of the Kitchen
Roshara Sanders ’14, culinary arts instructor, was featured on Fine Dining Lovers’ podcast “Freshly Squeezed: Food Stories Served Straight” sharing how she became the chef she is today. She spoke passionately about her time at the CIA, and how the college played a big role in shaping her after she got out of the Army.
Listen to the Fine Dining Lovers podcast >

Arash Azarbarzin ’89 was promoted to CEO of Starwood Capital Group’s subsidiary company, SH Hotels & Resorts, after three years serving as the company’s president. He has more than 30 years’ experience in the industry.
Read the Hotel Management article >

Scott Morozin ’04, chef-owner at Verbena BYOB in Kennett Square, PA has been inducted into the Marquis Who’s Who biographical registry. This registry, published since 1899, chronicles the lives of accomplished individuals and innovators from various fields, including politics, business, law, entertainment, and more.
Read the press release >

What to Watch/What to Read

Making Healthy Food Accessible
Joseph “J.J.” Johnson ’07 was featured on CBS Saturday Morning’s weekly food segment, “The Dish.” Johnson discussed how he worked to bring healthy food from his restaurant to his community in Harlem during the pandemic.
Watch the CBS Saturday Morning segment >

A Bakery Rises in Quarantine
ABC News Philadelphia interviewed Rhonda Saltzman ’13 and her sister, Mercedes Brooks, about their new bakery, Second Daughter Baking Co., which they opened during the pandemic after each lost a job last Spring.
Watch the clip from ABC Philadelphia >

Beyond the Matzoh Ball
Jake Cohen ’14 is releasing his debut cookbook, Jew-ish: Reinvented Recipes from the Modern Mensch, on March 9. The cookbook was inspired by Shabbat dinners he shared with his Persian-Iraqi husband that blended both their cultures and celebrates Cohen’s heritage and family recipes.
Read the Jewish Journal article >