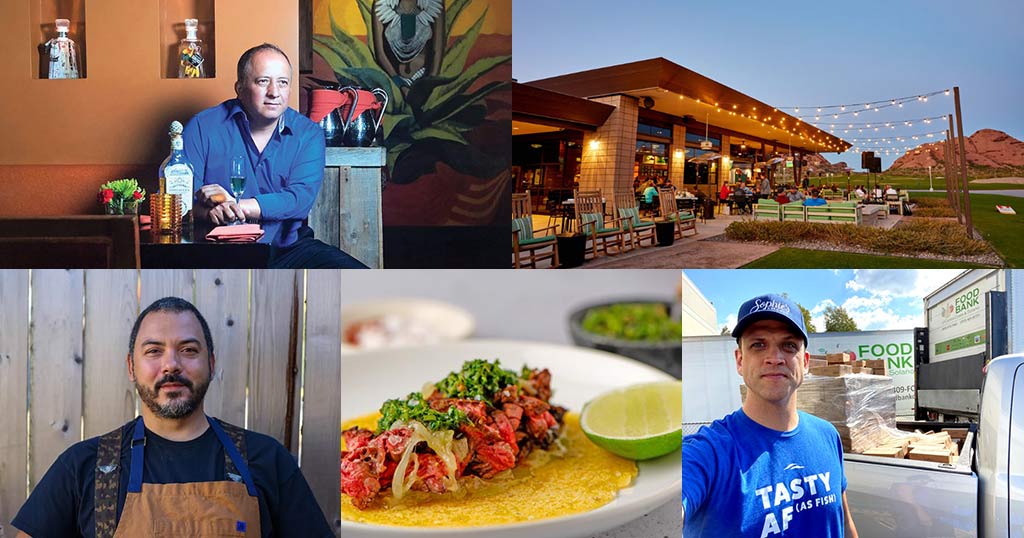 CIA alumni are always cooking up something interesting, and with a network more than 50,000 strong, there’s never a shortage of highlights! Here are just a few examples of CIA alumni in the news this past month.

Maneet Chauhan ’00 bested Brooke Williamson to win the Food Network’s Tournament of Champions. In welcoming her to the stage, the announcer noted that she graduated top of her class from the CIA.
Watch the clip >

Ernesto Delgado ’20, industry veteran and owner of Mayahuel, La Cosecha, and Mesa Mercado in Sacramento, CA, shares why even after years of success in the industry he decided to attend culinary school at the CIA. He describes his experience as an “empathy builder” and a “huge life change.”
Read the Sacramento Magazine article >

Jeff Russell ’07 was named new executive chef at Prime at Saratoga National in Saratoga, NY. The steakhouse reopened in April, after being closed due to the pandemic.
Read the Times-Union article >

Distant Relatives, a new food truck owned by Damien Brockway ’03, allows Brockway to introduce African-American cuisine to more diners, and share his research on how the African diaspora has impacted how Americans eat right now.
Read the Eater article >

Charles Kassels ’87 has been named the new executive chef at Lou’s Bar & Grill at the Papago Gold Club in Phoenix, AZ. His new menu will showcase ingredients from local artisans.
Read the Golf Wire article >

Brittany Vincent ’09 is opening her own bakery and café in Smiths Grove, KY called Linen Apron after working in catering out of a nearby event venue for six years. She plans to bring her past experience from working at the Apple Pie Bakery Café in Hyde Park, and a luxury resort, to her new business.
Read the BG Daily News article >

Franklin Becker ’93 is the latest chef to join the ghost kitchen movement with four new take-out and delivery concepts operating out of Zuul Kitchens in SoHo, NY. He feels it’s better to test concepts virtually, rather than in brick-and-mortar, because there is less financial risk.
Read the Total Food article >

Emily Vanlandingham ’20 was inspired by her freshly minted CIA master’s degree in food business to create Farmstand Live, a drive-in food and music festival that she hopes will help rebuild New Orleans’ post-COVID cultural economy. The first two events took place in April 24 and May 1.
Read the Eater article >

Edward Forster ’03 was interviewed about his incredible rejuvenation of the once slow Chandler Street in a quiet neighborhood in Buffalo, NY. Forster and his friends opened Waxlight Bar a’ Vin and worked with developer Rocco Termini to bring additional businesses, like a brewery and market, to the area.
Read the Lockport Journal article >

Dylan Wakefield ’07 and his wife, Dana, owners of Pendulum Fine Meats & Market in Norfolk, VA, have created a new restaurant model that allows pop-ups to operate out of the basement of their café space at a flexible rent rate. The symbiotic relationship has proven beneficial for both Pendulum and pop-up businesses involved and could be the next wave in restaurants.
Read the FSR article >

Miles Woodruff ’05, CEO of Sophie’s Kitchen, a plant-based foods producer, shares his top five things to know to create a successful food line or specialty food with Medium. He mentions along with his CIA degree, that he surrounded himself with food experts to adequately prepare for full-scale production.
Read the Medium article >

Austin Corrigan ’18, founder of High Seas Mead in Goleta, CA, discusses his process of producing organic, gluten-free mead, and how he hopes to expand his business and create a new market for the beverage.
Read the Santa Maria Sun article >