Home » Student Bloggers » A Blast from the Past: Seven Vintage Menus from the CIA Archives

A Blast from the Past: Seven Vintage Menus from the CIA Archives

Restaurants are such a big part of our modern lives. They’re where we celebrate our birthdays, anniversaries, and weddings. We have our first dates at bars and cafés. We even have restaurants bring food to us at home when we don’t feel like cooking. The concept of a restaurant is only about 250 years old, and the practice of offering guests a menu to choose from came along 65 years after the first restaurant. Since restaurants are so intertwined with modern living, their menus have become historical artifacts in and of themselves.

Here at The Culinary Institute of America, inside the opulent Conrad N. Hilton Library building, there is an archive department where you can find centuries of historical culinary artifacts and more than 40,000 vintage menus. Print menus like these are becoming a thing of the past because in this new world of dealing with COVID-19 and the reality of post-pandemic dining, a menu is simply a QR code to be scanned.

Archivist Nicole Semenchuk runs the show at the CIA archives, and is always there to nerd out with you about food history. There’s about 10,000 vintage menus online and Nicole needs your help to transcribe all these menus! Here are just seven from the menu archive that Nicole helped me find: 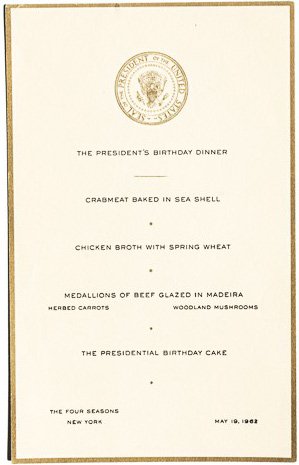 A Presidential birthday isn’t usually very memorable unless there’s a federal holiday tied to it. However, there’s one presidential birthday in recent history that stuck out to the point it’s infamous. On May 19, 1962, the 35th President of the United States, John Fitzgerald Kennedy, attended his 45th birthday gala in New York City. It was at that birthday party—held at both Madison Square Garden and the iconic Four Seasons—where Marilyn Monroe sang her legendary, breathy rendition of Happy Birthday to President Kennedy. Watch it here.

The Culinary Institute of America’s archives has the menu from that very dinner! Printed with gold lettering on heavy cardstock, the menu shows us what John F. Kennedy ate the night Marilyn Monroe sang happy birthday to him: If you were one of the lucky guests attending that exclusive party, you could dine with Norma Jean, Jackie, and Jack for the low price of $1,000 per plate, which is $8,913.74 in today’s dollars.

2. How the World Reacted to the Death of FDR

Speaking of important dates in presidential history, on April 12, 1945 at around 1 p.m., President Franklin Delano Roosevelt said “I have a terrific pain in the back of my head,” slumped over in his chair, and soon after passed away from a massive stroke. As a major leader of the Allied Powers, Mr. Roosevelt’s death was felt around the globe, even in the British colony of India. This vintage menu is from a famous tea room, pastry shop, and catering house named A. Firpo’s, which served the aristocracy in Kolkata, India. Issued on Sunday, April 15, 1945, the menu has a special note for its guests: “On Account of the death of Franklin Roosevelt President of the United States, as a mark of respect no musical dancing will take place today and tomorrow (Sunday)”.

Old restaurant menus are a fascinating look into world history because we can see exactly how everyday people reacted to world events. You can learn more about FDR at the Franklin D. Roosevelt Presidential Library, which is about a one minute drive from our Hyde Park, NY campus.

3. What Did the Apollo 11 Astronauts Eat When They Returned to Earth?

I bet that’s not a question you ever asked yourself in the shower or when random thoughts keep you awake at night—but did you know the first Earth meal for Neil Armstrong, Buzz Aldrin, and Michael Collins after visiting the Man on the Moon was actually brought to them by Stouffer’s? Yes, that Stouffer’s! The same company whose microwaveable mac and cheese and Salisbury steak occupy real estate in freezer aisles across the country supplied the astronauts with three weeks of meals that they could easily heat and eat.

Once the astronauts splashed down in the Pacific Ocean on July 24, 1969, they were quickly shunted into a Mobile Quarantine facility (aka, a trailer) and held in isolation for fear they might bring a “moon plague” back to Earth. It may sound silly now, but NASA really had no idea what to expect, so they decided to err on the side of caution. Eventually the three astronauts were brought to a facility in Houston with basic kitchen facilities and were presented with a variety of frozen foods to sustain them during their quarantine.

We think of Stouffer’s as an easy, no-thought meal, but during that era Stouffer’s had several middle-class restaurants in cities across the country. They were also pioneers in the TV dinner industry along with Swanson, Morton, and Banquet.

Of course, once their quarantine was over, the three men were honored with a hero’s dinner at Century Plaza in Los Angeles on August 13, 1969. 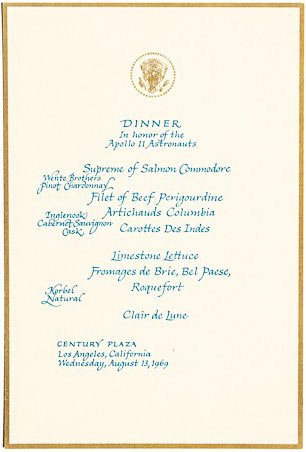 4. What Did Taco Bell Used to Serve? 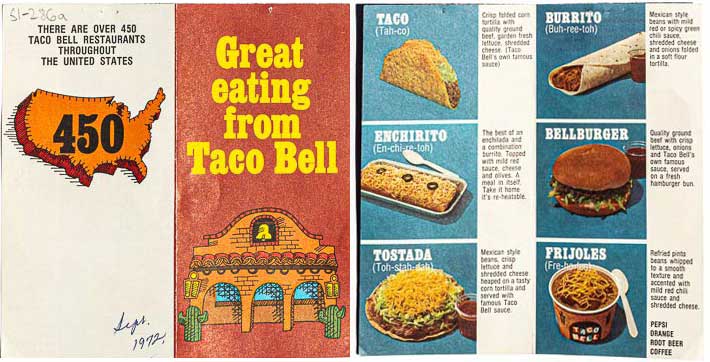 Before the Crunchwrap Supreme; before the Nacho Fries; before the orange-dust-coated, pant-leg-staining Doritos Locos Tacos; there were six menu items. This old menu from Taco Bell in September of 1972 showcases some of the first offerings from the world’s fourth most popular fast food restaurant: tacos, burritos, enchiritos, burgers with taco sauce, tostadas, and frijoles.

It’s interesting to see that the enchirito is way older than I had thought, but what’s more interesting is the fact that Mr. Bell had to include pronunciations of the food because his American-speaking guests would come in and order “Tay-Cos.” One thing I’ve learned at the CIA is that the onus is on us as culinarians to educate the average diner on how to eat. I recall a point in time, when I was a kid, that eating raw fish seemed absolutely gross. Well, now you can get sushi anywhere, even a gas station—but just because you can doesn’t mean you should.

5. Why is Airplane Food So Bad?

There actually is a lot of science behind this question that you could learn all about in culinary science classes at the CIA. Did you know altitude, cabin pressure, and engine noise contribute to our ability, or lack thereof, to taste food? That’s beside the point, though. We all know air travel ain’t what it used to be. Nowadays, your flight usually consists of six hours next to some guy snoozing away wearing a neck pillow and encroaching on your limited space while his kid kicks the back of your chair. Eventually the flight attendant will come by and offer you a bag of Cheetos and a tiny Coke for an extra cost.

It wasn’t always that way. Flying was considered a luxurious experience and Pan-Am Airlines was known for its fancy flights. Once your plane took off, you’d get a prix fixe menu consisting of shrimp cocktail for the first course, a very fancy breast of chicken regence from the pages of Escoffier, with buttered string beans, rice pilaf, and a French pastry. You could also have coffee; tea; and wine, if you were willing to pay it, at an additional charge.

6) What Food Did Escoffier Serve at the Carlton Hotel?

First let’s answer the question “Who was Auguste Escoffier?” He’s the man credited with bringing the brigade system to French cuisine. It’s a hierarchy Escoffier created during his time in the military where each station in the kitchen is dedicated to a specific task. The stations answer to their own respective chef who in turn answers to the sous chef, who then answers to the executive chef. It’s basically a military hierarchy brought into the kitchen. August Escoffier is known as the Father of Modern Cuisine due to his contributions.

So what did the Father of Modern Cuisine serve in his restaurant? We can answer that because we have an original copy of his menu in the archives from May 1909, signed by the man himself! One hundred twelve years ago, you could order roast lamb with herbs, quail casserole, and strawberries and cream melba from the chef of chefs. 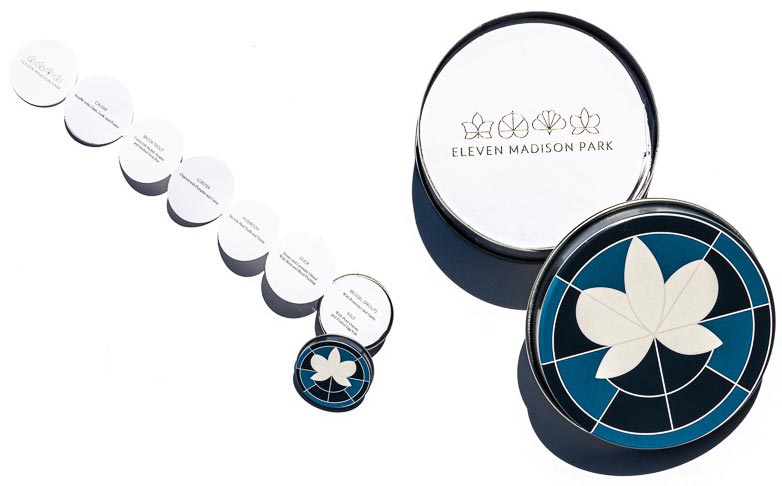 For decades, both climate and nutrition experts have been shouting from the rooftops that we as a society consume too much meat. Raising animals for consumption is one of the largest emitters of greenhouse gasses. The waste from these animals also pollutes our drinking water and harms nearby ecosystems. Also, vegetable proteins and fats are simply more nutritious.

Don’t get me wrong, I love a good bacon cheeseburger, but plant-forward diets are in our future. So when a restaurant like Eleven Madison Park, which has held three Michelin stars for the past eight years and counting, announced they were going completely plant-based, the world noticed.

If you were to go to Eleven Madison Park and experience one of their tasting menus, you’d get your very own printed menu of what you tried in a little tin at the end of the night as a keepsake. This is a recent menu from before the pandemic that a student who visited the restaurant donated to the archives. The menu from only a few years ago—containing caviar, trout, lobster, and duck—is now an artifact reminding us that we are currently living through history.