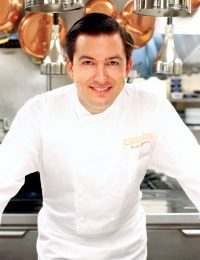 One year into his tenure at Café Boulud, Aaron Bludorn was ready to move on—granted he’d moved up from soup and salad duty to the fish station—but the CIA graduate knew there had to be bigger fish to fry in his future. Fortunately for Chef Bludorn and the restaurant, his mentor, Chef Gavin Kaysen (then executive chef at Café Boulud and now chef/owner of Spoon and Stable in Minneapolis), convinced him to stay. Chef Bludorn rose to sous chef and chef de cuisine before taking the helm in 2014 when Chef Kaysen left. This positioned Chef Bludorn in an elite group of former executive chefs that includes Andrew Carmellini, Alex Lee, and of course, Daniel Boulud. Prior to joining Café Boulud in 2009, Chef Bludorn spent time at Canlis Restaurant in Seattle as well as three years at Cyrus Restaurant in Napa Valley. 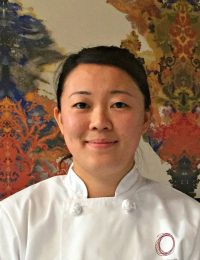 Life is sweet for Chef “Jessie” Liu, as her role as the Pastry Chef for the Michelin-starred seafood-centric Providence affords her many opportunities to bring Japanese ingredients into the dessert menu, effectively complementing the subtle Asian influences that color the cuisine of executive chef and co-owner Michael Cimarusti ’91. Originally from Taiwan, where she studied nutritional science and earned a dietitian license, Chef Liu came to the U.S. in 2011, attended The Culinary Institute of America at Greystone, and began her odyssey into the world of pastry at the Bouchon Bakery in Yountville, California. When she came to L.A. in 2013, she worked first at Patina and then joined Providence, where she trained under former pastry chef David Rodriguez. Her trademark is to unite savory and sweet elements, like introducing soy sauce to sorbets or black sesame into bonbons. 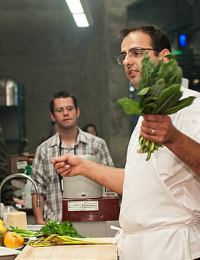 Chef Alon Shaya could have relaxed. Winner of the 2015 James Beard Best Chef: South award, he had Domenica and its casual spin-off, Pizza Domenica, firmly placed in the upper echelon of New Orleans’ culinary landscape. Yet, nostalgia kept tugging at the 37-year-old chef, who was born in Tel Aviv, Israel, and raised in Philadelphia. He traveled overseas to explore his admittedly forgotten past, cooking for Israeli soldiers and thinking back to his grandmother’s recipes. What resulted was Shaya, a modern Israeli concept that breaks through The Big Easy’s Cajun ceiling. To say it’s enjoyed a measure of success would be a comical understatement: Shaya, which opened in February, was recently called The Best New Restaurant in America by Esquire magazine.

“I took home economics in high school,” Chef Shaya says. “From the age of 13, I was working at butcher shops and bakeries, and washing dishes at a restaurant. By the age of 16 I was cooking in a restaurant. It was something I always knew I wanted to do.”